Refugees & Asylum Seekers
Insaf Hamo is a Syrian refugee who moved to Belfast in November 2016 with her family. Insaf’s family have been resettled to the UK through the Government’s Vulnerable Persons Relocation Scheme and received the support of the Vulnerable Syrian Refugee Consortium throughout her settling process in NI. 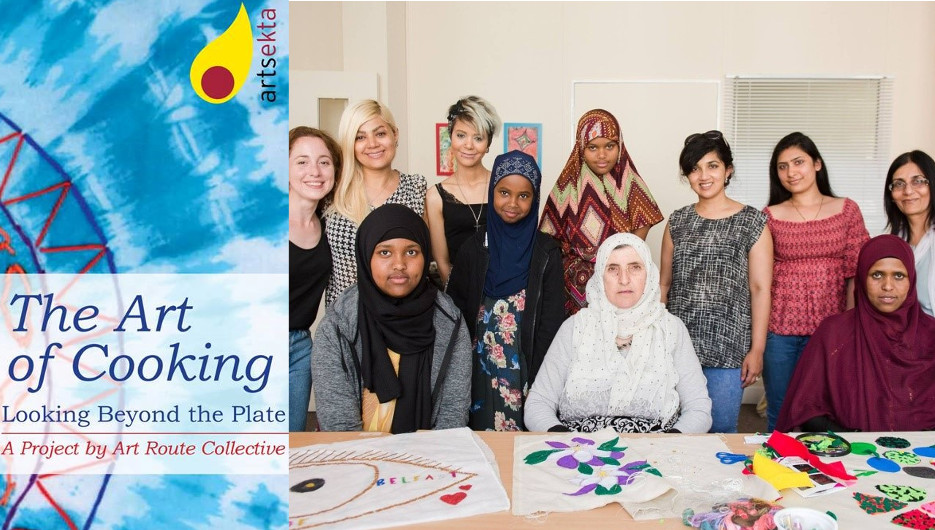 In January 2017, Insaf joined a 10 weeks arts and crafts pilot programme delivered by Arts Ekta together with a number of other refugees from a range of different countries at the Morton Community Centre in Belfast. Supported by Bryson Intercultural and the Vulnerable Syrian Refugee Consortium with language assistance at the initial stage, Insaf became a regular participant and quickly stood out in the group with her extremely talented hands by producing beautiful art pieces.  The workshops were offered free to all participants and were funded by the Public Health Agency with the aim to provide the opportunity to engage in creative activities, giving them space to interact and be themselves with clear benefits to their mental health and well-being.

The group was so successful that, after the 10 weeks, the organisers decided to extend the programme and the Art Route Collective group of refugee women was created. Along with Insaf, these talented refugee women who took part in creative workshops between January and July of 2017, have established social connections through their interactions and amazing work.  One of the projects, led by textile artist and designer Karishma Kusurkar of Karishma's World, resulted in a beautiful book, packed with recipes from right across the world. Food is one of the things that we all have in common; it sustains us and it's at the centre of so many traditions and celebrations worldwide.

'The Art of Cooking: Looking Beyond The Plate' was launched at Belfast Mela Festival on August 27th. The book and an exhibition of the textile art created by Insaf and her peers was on display at the Mela Festival’s ‘Craft Village’ where many of the items were available to be purchased.

What better way to come together than through creativity and sharing our food with each other?  The Art Route Collective group has paused their activities for the summer holidays and plan to continue with their work from September 2017. Watch this space...